A Loss of Heart and Soul 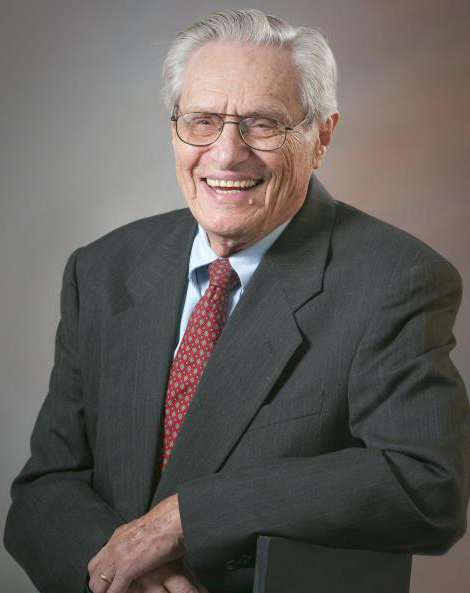 During his decades of work at Wake Forest Baptist Medical Center and the Wake Forest School of Medicine, Jesse H. Meredith, MD, developed a deep understanding of what working at this particular academic medical center is all about.

“The interaction between people — students, doctors, patients, nurses, everybody — that is its heart and soul,” Meredith once said of the Medical Center. By the time Meredith died in April 2021 at age 98, he had become a big part of that heart and soul as well.

“Jesse personified all of our Wake Forest Baptist values,” says Julie Freischlag, MD, FACS, FRCSEd(Hon), DFSVS, chief executive officer of Atrium Health Wake Forest Baptist, dean of the Wake Forest School of Medicine and chief academic officer of Atrium Health Enterprise. “His love for his family and his professional achievements serve as examples for all of us to strive for excellence and service in all we do. He had a towering presence, both literally and figuratively, and he will be greatly missed.”

Meredith was professor emeritus of surgery, a world-renowned pioneer, an innovator and a legend in his field. His son, J. Wayne Meredith, MD, FACS, MCCM, chief of chairs and chair of surgery with Wake Forest Baptist, has added to his family’s legacy of leadership with the School of Medicine and the Medical Center.

The elder Meredith compiled an impressive career while also helping thousands of people through simple acts of generosity or kindness. He powerfully influenced countless residents, students and patients.

“You’d be hard-pressed to find a student who didn’t enjoy rotating with him,” Patricia Adams, MD, a 1974 alumnus of the Wake Forest School of Medicine and a frequent colleague of Meredith’s in the operating room, once said. “He listened to you. He didn’t turn you loose, but he made you participate. And, of course, he was funny.”

Meredith grew up on a farm in Fancy Gap, Va., that lacked electricity. He attended Elon College, where he met his wife, Lillian, who was his companion in marriage for 70 years until her death in 2016. Following college, he served in the U.S. Army as a glider trooper during World War II. Afterward, he attended engineering school at North Carolina State University for a year before attending the medical schools at UNC Chapel Hill and Case Western Reserve University. He interned at Bellevue Hospital in New York and completed residencies in general and thoracic surgery and cardiovascular surgery at Wake Forest Baptist before launching his surgical career.

In the early 1960s, Meredith designed the first intensive care unit in North Carolina at Wake Forest Baptist, which was also one of the first units of its kind in the nation. In 1965, he performed the nation’s first hand re-attachment surgery, and he was the first surgeon to perform a kidney transplant at Wake Forest Baptist. He is credited with starting the organ transplantation program, and he established and became director of the first burn unit and tissue bank in North Carolina. Meredith also founded and served as the first director of the School of Medicine’s Department of Biomedical Engineering.

In addition to his vast accomplishments at Wake Forest Baptist, Meredith served on what is now known as the N.C. Commission for Public Health for 40 years and as its chairman for 30 years, helping pass more than 2,000 public health regulations while never missing a meeting. He retired in 1993 after a 41-year career at Wake Forest Baptist, but he continued to serve as a member of the institutional review board for many years. In 2010, the Wake Forest Institute for Regenerative Medicine surgery research center was named in his honor. In 2011, the American Medical Association presented him with its Distinguished Service Award.

Survivors include three sons, Wayne and his wife, Gayle; Dwight; and Michael and his wife, Rebecca; six grandchildren and two great-grandsons.

Memorial gifts may be made to the Jesse H. Meredith Visiting Professorship in Surgery or the
Meredith Student Research Support Fund.