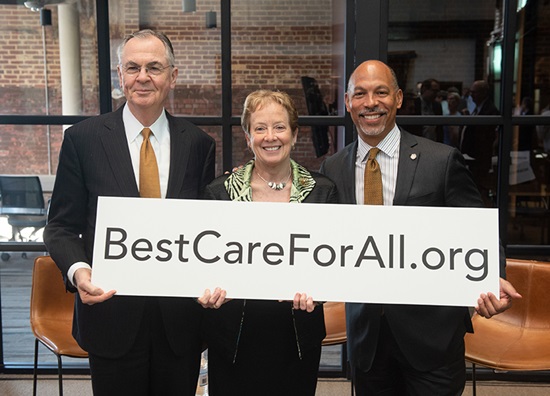 The planned strategic combination of Atrium Health, Wake Forest Baptist Health and Wake Forest University stands to impact the health of nearly 8 million people throughout the Southeast while creating one of the largest academic health systems in the country.

“We’re very excited about the shared potential,” Eugene Woods, MBA, MHA, FACHE, president and chief executive officer of Charlotte-based Atrium, told attendees at a Dean’s Forum event in February. “We’re still creating what the final product will look like, but our teams have been working very well and very hard together. I’ve been in health care for almost 30 years now, and this is the most exciting thing I’ve been part of.”

Plans for the strategic combination, which was announced in 2019, remained under review by the appropriate regulatory agencies.

“As we’ve gotten to know each other, I think there’s such an opportunity to talk more about what we can do together for each patient we see every day,” said Julie Ann Freischlag, MD, FACS, FRCSEd(Hon), DFSVS, CEO of Wake Forest Baptist and dean of the Wake Forest School of Medicine. “It’s been hard to be patient as we wait for the process to finish. I want to get going with things, but we can’t quite yet.”

Plans include a second Wake Forest School of Medicine campus to be built in Charlotte, creating one medical school with its current name and two campuses.

Freischlag said she would like to grow the number of MD students from 145 to 200, and the combination would provide more clinical training sites. A cohort of 30 third year MD students likely would be the first group placed in Charlotte, with additional students and faculty added later.

School leaders may expand virtual learning opportunities to connect the two campuses and to lower the costs of medical education. The new entity would educate nearly 3,200 students, residents and fellows across more than 100 specialized training programs each year.

“I think as the Wake Forest School of Medicine name gets bigger and our footprint gets larger, the nation will actually be sending patients to us,” Freischlag said. “We will have a bigger footprint that people will notice.

Research work in Winston-Salem would expand with a focus on basic sciences, translational research and population health. Woods noted that Wake Forest Baptist ranks among the nation’s leaders in several research areas, including aging and Alzheimer’s, cardiovascular disease, diabetes and regenerative medicine.

“We’re committed to the same things, but it would take us probably a decade of dedicated time and resources to catch up to the research that’s happening here,” Woods said. “With this combination, from day one, we will have access to the latest clinical trials and all the wonderful work that’s being done here. We have about 14 million patient encounters, so just think about the opportunities we have to bring this research to all the patients we touch.”

Also important is the school’s approach to research. Woods shared a story from The Wall Street Journal about a blood pressure study led by Wake Forest School of Medicine researchers. The study was paused when researchers realized they could help patients immediately if they shared early successful results. “When we talk about work that goes from bench to bedside, this is an organization that’s actually doing it,” Woods said. “They’re trying to put what they learn in the hands of clinicians as fast as possible to help keep people healthy.” Freischlag and Woods agreed that rural health, expanding telehealth opportunities and serving uninsured and underinsured populations while also staying on the leading edge of medical science would be priorities for the new entity. They also agreed that the organizations’ cultures appear to be in sync.

“Where these partnerships haven’t worked, it’s been less about the structure of who reports to whom and more about the fundamentals of how you work together and whether you are really coming together as one team or not,” Woods said. “Every time we come together, we feel like we’re much more of a family.

“We are excited about the vision. When we get our teams together, I think the things they will come up with in the years to come will make us something very unique in this country.” 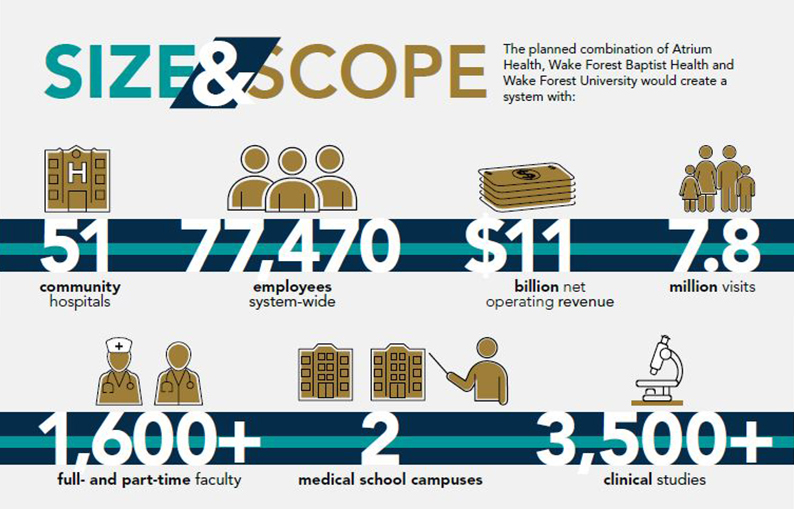