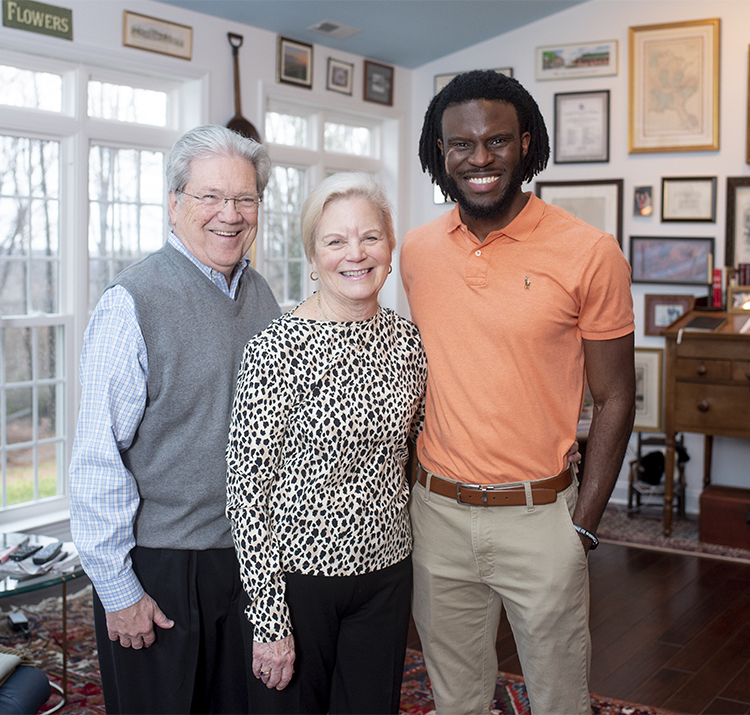 (From left) Gene Adcock, MD ‘66, and wife CarolAnn with Christel Wekon-Kemeni, recipient of the Adcock Scholarship and a member of the Wake Forest School of Medicine’s MD Class of 2019

After graduating from the Wake Forest School of Medicine and completing pediatric residency training at Wake Forest Baptist Medical Center and The Babies Hospital of Columbia Presbyterian, Eugene “Gene” Adcock, MD ’66, spent his career giving back to the institutions where he had trained.

He returned to Wake Forest Baptist in 1989 and was appointed professor of pediatrics. He was a clinical neonatologist who also served as an associate dean and vice president at the Medical Center. He retired in 2002 and was named professor emeritus.

Here, he and his wife CarolAnn discuss the Eugene Wesley Adcock III, MD and CarolAnn Adcock Scholarship Fund they established at the School of Medicine.

Q. What were your primary motivations for establishing a scholarship?
A. “As a student, I was very aware that I had benefited from the generosity of others as a Reynolds Scholar. Because of that and because of what the medical school has meant to me, my career and our family, we had always intended to include the Wake Forest School of Medicine in our estate plans.

“The Reynolds Scholarship no longer exists in the form that made my medical school education possible. We knew how important of a priority endowed scholarships were for the school, and we decided to designate a percentage of our estate to establish the Eugene Wesley Adcock III, MD and CarolAnn Adcock Scholarship Fund.”

“An endowed scholarship can be funded in several ways. We learned from the Philanthropy and Alumni Relations team about the benefits of using IRA distributions to make gifts. Anyone who is 70½ or older can transfer funds from an IRA to a charitable organization. They can count the gift (up to $100,000 annually) as the Minimum Required Distribution, and they can exclude that distribution from the income tax they pay.

“An endowed scholarship can be named for you, for a mentor or for family members. It is a lasting legacy that fills a vital need.”

Make a Gift Today
This article appeared in CenterViews Spring 2019. Read More From This Issue