Truslows Carry on Philanthropic Family Tradition Through Volunteering and Philanthropy 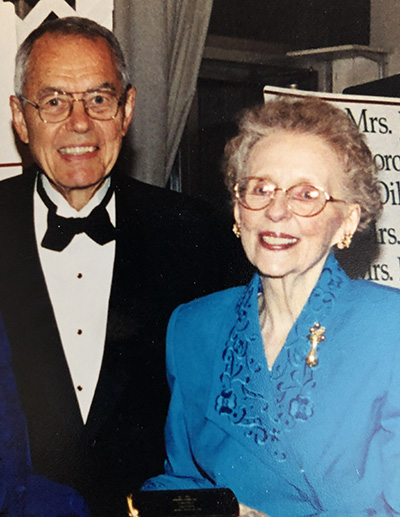 As one of the early graduates of the Bowman Gray School of Medicine, Roy E. Truslow, MD ’45, along with his wife, Caroline Gray “Tine” Truslow, added to a family tradition of giving. Their three children have now extended that tradition to a new generation by funding a medical scholarship in their parents’ names.

“Primarily, the three of us simply wanted to honor our mother and father,” William W. “Will” Truslow, MD, says of the scholarship he funded at the Wake Forest School of Medicine along with siblings Robert Gray Truslow and Janet Crump Truslow. “It continues honoring a couple who have honored their ancestors.”

When Roy and Tine established the Eugene P. Gray Memorial Scholarship, in memory of her father, in the mid-1970s, they both honored family and extended a tradition of giving. By funding the scholarship with his wife, Roy is believed to be the first alumnus of the four-year MD program to endow a medical scholarship at the school.

“That legacy has influenced me in a positive way,” says Will, now retired from his Greensboro, N.C., rheumatology practice.

“Our parents recognized the value and the need for a good education. They also recognized it can be expensive, and if you can get your education with little or no debt, the better off you are. It was a dual purpose of defraying the cost through scholarships and helping people become better educated, better able to participate in their communities and become leaders.”

The medical school was a special place for Roy and Tine, who met there when Roy was a student and Tine was working in administrative support in pediatrics. They married in 1946.

Roy and Tine enjoyed traveling extensively until her health declined in the late 1990s, and he cared for her until her death in 2000. Will describes his mother as well educated and well read, a woman who appreciated research and learning and was devoted to her church.

For years in retirement, Roy was a fixture in Reidsville seen frequently walking and entertaining at the local McDonald’s while drinking coffee. He refinished countless pieces of furniture that he gave to his children and grandchildren. In 2012, he moved to Abbotswood Independent Living in Greensboro and lived there until his death in 2020 at age 98.

Roy and Tine’s passion for caring for their community now lives on through the Wake Forest School of Medicine scholarship named in their honor.