Dancing Again: A Gift Made in Gratitude 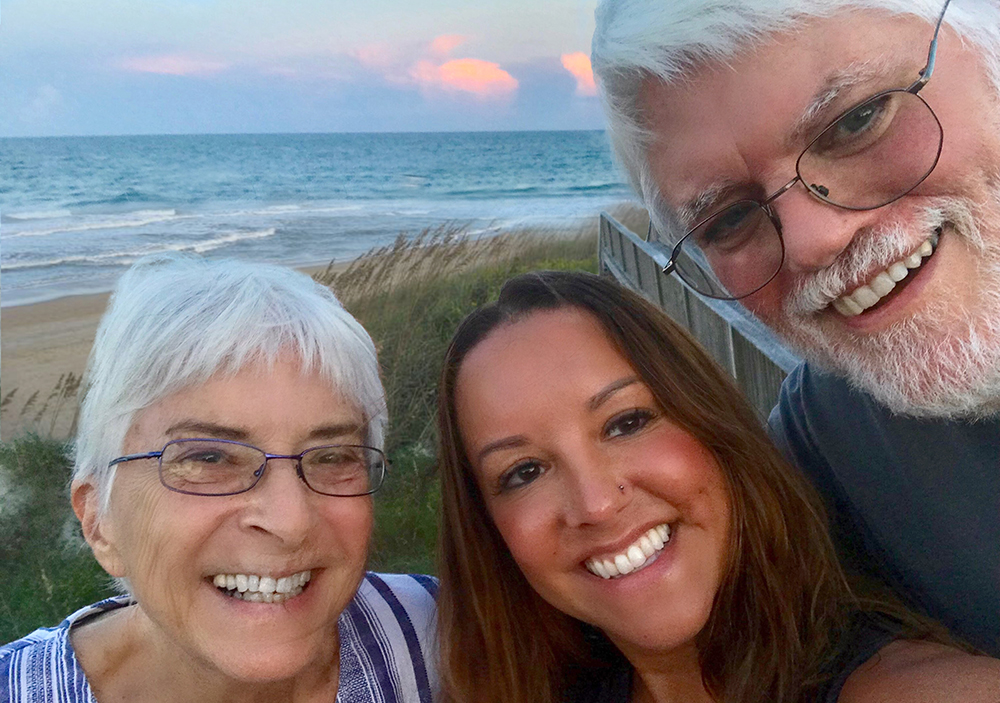 Greg Sprole (right) with wife Cheryl and their youngest daughter, Sarah Sprole Boyle, at the beach. Greg says, "I was able to dance -- really let lose -- at her wedding last year thanks to Dr. Hemal."

Greg Sprole, suffering from years of kidney problems and staring down dialysis to stay alive, emerged from kidney cancer surgery pondering a question: How much is your life worth?

“I know people who are on dialysis, and it can be like slowly fading away,” he says. “There is no happy ending to losing a kidney in your late 60’s.”

Greg, 71, is a retired engineer who spent his career designing and selling pollution prevention devices—as he says, helping companies save money while also helping the environment.

He endured kidney problems for years. The most serious issue emerged in 2016 when magnetic resonance imaging identified a large mass in one of his kidneys. His Charlotte primary care physician gave Greg and his wife, Cheryl, the bad news—the mass appeared to be wrapped in large arteries and veins, making it very difficult to remove without also removing the entire kidney. Greg’s urologist agreed.

With both doctors emphatically stressing the mortal dangers involved in removing the mass from the kidney, Greg immediately began researching kidney cancer to learn how fast it grows and how it is treated. Greg was not convinced he had cancer based on the growth rate of the mass.

Greg’s research led him to Ashok Hemal, MD, a professor of both Urology and Regenerative Medicine and the director of Wake Forest Baptist Health’s Robotic and Minimally Invasive Urologic Surgery Program. Greg’s physician made a referral.

“When I met Dr. Hemal and presented my theory, he felt almost certain that the mass I had was cancerous. I replied that my only chance was to remove the mass and leave the kidney; otherwise, I knew I would be on dialysis with only one damaged kidney left behind,” Greg says. “I couldn’t imagine my life that way.”

Greg liked everything he read about Hemal. He learned that Hemal didn’t rush into choosing surgery. Not only did Hemal have an impressive track record of successful surgeries, he carefully vetted his patients to be sure they were proper candidates for the procedure.

In July 2016, Hemal proceeded with surgery using the da Vinci XL System, a robotic-assisted device that gives the surgeon enhanced vision, precision and control, and a 3-D, high-definition view inside the body. Hemal is widely known as a pioneer in the field of robotic urologic surgery, having devised many of the initial surgical protocols now used worldwide.

Hemal was able to remove the mass without having to remove the kidney. All went well, and patient and doctor waited on test results to confirm whether the mass was malignant.

“Dr. Hemal is always one to be dressed formally and he speaks very formally—it was always ‘Mr. Sprole’ when he talked with me. When the tests came back, he entered the room coatless, slapped me on the knee and said ‘Greg, how about that?! The mass wasn’t cancerous. You don’t have to spend the rest of your life worrying about cancer and dialysis!’” Greg laughed. “I think he was happier with the result than I was!”

In the days that followed, the Sproles found themselves contemplating a fundamental question: How much is your life worth? Without the skill of an expert surgeon to remove the mass and determine its composition without removing or damaging the kidney, the outcome might have been very different.

“As I got to know Dr. Hemal, I realized he’s devoted his whole life to teaching others,” Greg says.

“During my visits with him that summer, he related some of the places he was heading off to on his ‘look what you can do with this tool’ tour with such enthusiasm that Cheryl and I could not help but want to continue to be a part of it. It is a joy to interact with someone who finds such fulfillment in bringing joy and health to others.

“Knowing how much he had done for my life, I asked him what I could do to support his work.”

In gratitude for his care, Greg and Cheryl gave an initial donation of $10,000 to the Urology Robotic Education and Research Fund. To date, they have made two more annual gifts for a total of $30,000 to support Hemal’s research.

“I know he has dedicated his life to doing good, traveling all over the world demonstrating how to save and enhance lives,” says Greg. “What a wonderful thing that Wake Forest Baptist does to bring in people like Dr. Hemal and give them the best tools with which to work.

“My experience was the best I could’ve hoped to have. Our support for Dr. Hemal will help him treat others like me. I’m so happy to be here and to be able to give!”